Can a Calvinist Know They Are Saved? 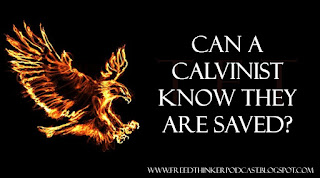 Can a Calvinist know that they are saved? This objection, typically from Provisionists and Lutherans, is a common sticking point in soteriological discussions. But is it a good objection?

Email ThisBlogThis!Share to TwitterShare to FacebookShare to Pinterest
Labels: calvinism

The Fragility of Libertarian Incompatibilism 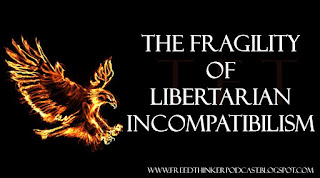 The weaknesses of Libertarian Incompatibilism are manifold. There are so many defeaters for it that it’s hard to imagine how anyone can affirm it with absolute dogmatic certainty. Even if one believes that it is true, they should at least hold it with a good amount of intellectual humility and understanding of why the vast majority of philosophers and theologians over the millennia have denied it in favor of some manner of Compatibilism.


Part of the problem is that it is a position that rests on TWO firm principled positions such that they claim that if X obtains, then Y is necessarily false. That is, if God has determined something then it cannot, in principle, be a free act sufficient for moral responsibility; and that if God has determined something that is immoral or evil, then God is, in principle, blameworthy for that evil. The reason that this makes the position so fragile is that if one can present even ONE exception to either of the principles, then the view is falsified.

Here, numerous examples have been given to that effect (one reason why most do not affirm the view). But let me give only one example from the Bible that is an exception to BOTH principled positions.

“22 “Men of Israel, listen to these words: Jesus the Nazarene, a Man attested to you by God with miracles and wonders and signs which God performed through Him in your midst, just as you yourselves know— 23 this Man, delivered over BY THE PREDETERMINED PLAN AND FOREKNOWLEDGE OF GOD, you nailed to a cross by the hands of godless men and put Him to death.”

In this passage we observe two facts:

1. The crucifixion of Jesus was something that was brought about by God’s determinative plan and foreknowledge;

2. God’s determining plan was to have the incarnate 2nd person of the Trinity, the Son, executed as an act of state sponsored deicide – the most evil act in human history to which the responsible agents (Jewish leaders, Pilate, Judas, the soldiers who tortured him, etc) were all morally responsible for their actions, and thus sufficiently free.

These two facts serve falsify the two principles above. Firstly, the crucifixion came about “τῇ ὡρισμένῃ βουλῇ καὶ προγνώσει τοῦ θεοῦ”. This phrase is interesting for several reasons. Firstly, many translations will supply the prefix “pre-“ to “determinate/determined.” This is not a bad translation as it gets at what is likely meant by Peter in his sermon considering it is connected to God’s foreknowledge. However, to avoid the charge, however unwarranted, that using a dynamic equivalence meaning of ὡρισμένῃ, I will simply translate this as “ordained” or “determinate.” This is the same word used in Luke 22:22 when Jesus says, “For indeed, the Son of Man is going as it has been determined; but woe to that man by whom He is betrayed!” Here, Jesus uses a perfect tense participle – something that has already been completed in the past. The idea conveyed here is clearly that there is not only something that is known, but something that God has ordained or determined will happen.

Paul, in his sermon in Acts 17:30-31, says the same when he says, “So having overlooked the times of ignorance, God is now proclaiming to mankind that all people everywhere are to repent, because He has set a day on which He will judge the world in righteousness through a Man whom He has appointed, having furnished proof to all people by raising Him from the dead.” It is not merely that God knows in the abstract that Jesus would come and die, it is that Jesus was appointed to die. God directly planned that; he decreed and intended it to happen. It is not something passive on God’s part. Paul echoes this in Romans 1:4 when, speaking of Jesus, he writes, “…who was declared the Son of God with power according to the Spirit of holiness by the resurrection from the dead, Jesus Christ our Lord…” (This same use relating to Jesus being ordained by God is present in Acts 10:42). Here, we start to see the overlap between God’s active decree and his determination of something to come to be. This is rooted in the notion that a sovereign, like God, creates reality by declaring something to be the case – epitomized in the creation account of Genesis 1 where God speaks creation into existence. When God declares “Let X be,” it is not a simple description of what will happen, or even more weakly, what may happen. Rather, it is the ordaining of something to happen.

The term is also used in Numbers 34:6 and Joshua 13:27 of the establishing of boundaries. Here they did not merely know about boundaries, but rather, to ὁρίζω just meant to decree/establish/ordain/bring about the boundaries and thus actually mark out what will and will not be part of the land/property. (The use of the term to establish/ordain the boundaries of nations, and even when and how long they would exist for, is used in Acts 17:26 during Paul’s sermon on Mars Hill). We see something similar in Acts 11:29 where ὁρίζω is used to describe the disciples determining to set aside money as relief for those in need. They did not just let the chips fall where they may, so to speak, but they determined the definite amounts that they would give. It was a determinative act.

So what we see in Peter’s statement in Acts 2:23 is that the cross was brought about “by the determinate plan… of God”. That is, the plan of God is what established and determined it, it brought it to be as if it was a creative decree. It was not only by God’s foreknowledge, (which creates problems for Open Theists considering it requires the free actions of those agents involved and God knows them) but it is precisely because of God’s determinative decree in the past, prior to the events, that the crucifixion occurs.

This then demonstrates the first fact – that the crucifixion was brought about by God’s determinative plan. However, we see that Peter places the blame squarely on the Jews he was addressing when he declares, “you nailed to a cross by the hands of godless men and put him to death.” Notice that Peter on the one hand can say that the crucifixion is “by the determinate plan of God” and yet also that “you nailed (him) to a cross…” God determined the action but the people were freely and thus morally responsible agents.

Secondly, by implication, we see that the thing that God’s determinate plan brought about was deicide – the state sponsored murder of the only unfallen and innocent person ever to walk the earth. This is the most evil thing to ever happen. Libertarian Incompatibilists will often try to use emotive reasoning to persuade people of their position: “Oh you mean God determined the rape and torture of small girls in sex trafficking?!” The rhetorical point here should not be missed. They want to cause an emotional, not a rational response. Here, we think of something so horrific as child sex trafficking (a truly evil and disgusting practice) and the Libertarian Incompatibilist wants you to make the unwarranted leap to the conclusion that therefore God could not have possibly determined something to evil to happen.  This attempt to force us into a non sequitur is powerful because our emotional response to such evils is very deep and visceral. The problem however, is that such an appeal highlights that we often do not think of the horror of the crucifixion enough. Rather than wonder how God could determine human trafficking, it highlights that we  are not equally appalled that God could determined deicide of his own Son!

However, for this fact to go through, one need not agree that the crucifixion was the superlative evil of all human history, though that should make this point more poignant. One only need to think that is an evil act for this second fact to go through. Here we have an act that God has determined to be, and we know that it is an evil act. And yet Peter does not blame God, but rather blames the agents who handed Jesus over and those who went through with the crucifixion. So, we see that God can determine something evil to be brought about by the free choices of his creatures, and yet not be blameworthy for them. In fact, the New Testament commonly glorifies God for the crucifixion, so it may even be the case that the manner in which God does decree and determine evil to happen, far from bringing blame to God, may in fact bring glory to God for his righteousness, justice, and plan of salvation. As Paul says in Romans 9:22-23, speaking of the objects of mercy and objects of wrath that God himself had fashioned, “What if God, although willing to demonstrate His wrath and to make His power known, endured with great patience objects of wrath prepared for destruction? And He did so to make known the riches of His glory upon objects of mercy, which He prepared beforehand for glory...”

Therefore, we can see from one single scriptural example, that Libertarian Incompatiblism is not only implausible, but definitively falsified due to the fragility of the core principled stances that it takes. 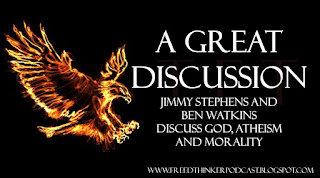 Responding to Wade's 10 Questions for Christians 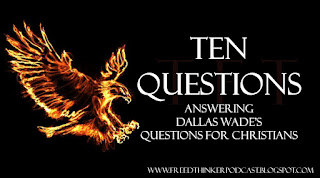 In this episode, I take a crack at responding to Wade's 10 questions for Christians. 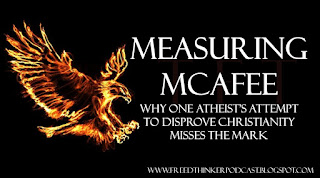 1. My full book review of McAfee's book on Amazon ($9.99 paperback; free on KindleUnlimited)

2. Disproving the Writings of David McAfee

4. Review of David McAfee's article on the Secret Gospel of Mark, by NJ Bruzzese and Tyler Vela

5. How to Respond to McAfee's Disproving Christianity Flyer

6. Audio version of the book:

The Invisible Gardener: A Parable for Skeptics? 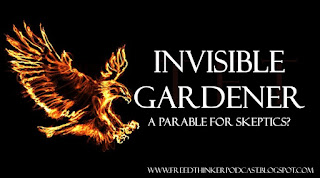 Here I discuss  the old parable of the invisible gardener and why it actually does not support the skeptical position of most atheists.

An Argument for the Reasonableness of Belief in God 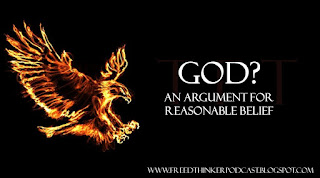 In this episode I update my opening statement from my debate with Matt Dillahunty and present an argument for reasonable belief in God.

Response to TurretinFan on Genesis 1 and YEC 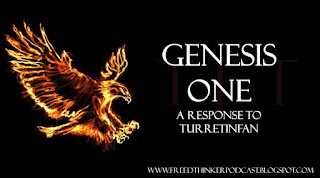 In this episode I give my rejoinders to a response article from TurretinFan where he gave objections to my work on Genesis 1.

(For more of my work on Genesis 1, CLICK HERE) 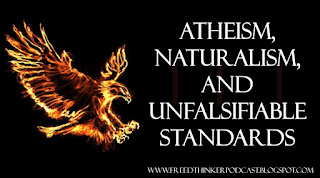 In this episode I discuss atheism, naturalism and if their epistemic standards of evidence insulate their worldview from falsification and create a question begging standard. 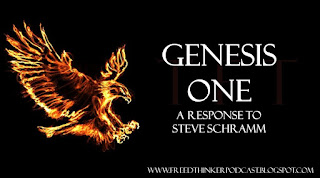 In this episode, I give part two of my response to my friend Steve Scrhamm on some of my comments about Genesis 1 and Young Earth Creationism.

(For more of my work on Genesis 1, CLICK HERE)