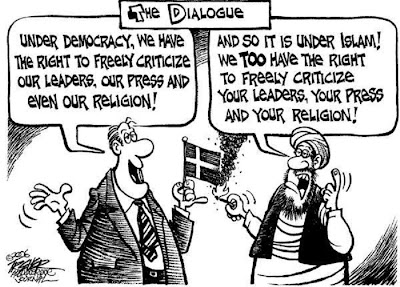 In his recent post in the online journal American Thinker called “Secularism Ongoing Debt to Christianity,” Secular Atheist and author John D. Steinrucken made quite a surprising admission. One only need to read the title of the article to see that what followed was a drastic departure from the normal anti-religious rhetoric coming from more prominent Atheists and Secularists. And what a change indeed. Rather than claiming that “religion poisons everything,” Steinrucken actually asserts that religion, more specifically the Judeo-Christian conviction, actually is the efficient cause for the wide-spread liberty and freedom that secularism has enjoyed in the West since its inception. Not only does he assert that Secularism was fostered in what could loosely be called “Christendom”, but actually that the fate of Western Secularism is intertwined with the survival of the Judeo-Christian worldview in the West as well. As goes the latter, so goes the former as it were.

What is most striking about his article is the forthright admission of the inability of Secularism to ground any kind of moral standard. This has been a topic of interest on RL for quite some time now, and on this, Steinrucken seems to be on the side of the faithful. Score one for the home team. Now, before all my fellow theists get too elated, Steinrucken is not making the case that such morals are REAL, only that the BELIEF in objective morals, such as can only be grounded by religious convictions about the justice of God, objective truth, and the real and universal value of human persons, is pivotal to the survival of a free Western society.

To that end he says, “Those who doubt the effect of religion on morality should seriously ask the question: Just what are the immutable moral laws of secularism? Be prepared to answer, if you are honest, that such laws simply do not exist! The best answer we can ever hear from secularists to this question is a hodgepodge of strained relativist talk of situational ethics. They can cite no overriding authority other than that of fashion. For the great majority in the West, it is the Judeo-Christian tradition which offers a template assuring a life of inner peace toward the world at large -- a peace which translates to a workable liberal society. ”

Well put. Later he even goes so far as to say, “Secularism has never offered the people a practical substitute for religion.” He briefly alludes to the failed attempt at Secular utopias that ended up causing some of the worst crimes against humanity ever perpetrated in the history of mankind. Those secular attempts for utopia, “when actually put to the test, have not merely come to naught. Attempts during those two centuries to put into practice utopian visions have caused huge sufferings. “ Sadly, we have no want of examples that affirm his statement – Stalin’s Russia, Mao’s China, Hitler’s Germany, Hoxha’s Albania, Castro’s Cuba, Pol Pot’s Cambodia, and on and on. It is no small thing that the most secular century has been, hands down, the bloodiest century in human history – a fulfillment of Nietzsche’s dark prediction that the death of belief God would mark the beginning of the most violent era in human history. People would replace their faith in God with faith in the state – “barbaric nationalistic brotherhoods” as he called them.

We get a sense that Steinrucken has read Nietzsche and has imagined the same fate. What most people don’t know is that Nietzsche did not only make a prediction about the 20th century, but also the 21st - and it doesn’t get any better. Nietzsche saw that the 20th century would at the very least have some residual moral sentiment left over from the 19th century and such a sentiment would curb the barbarism. The 21st century however would have no such sentiment. He predicted a “total eclipse of values.” If it was so easy for the Secular Utopias to marginalize, then criminalize, then euthanize vast swaths of their citizens even with residual values, how much more easy will it be to do so when values are entirely passé? However, where Nietzsche saw the inevitable, Steinrucken desires to avoid such a societal collapse.

Here again I must remind my fellow theists not to get too excited. Steinrucken is not advocating for some widespread conversion to faith. His point is that it is in the secularists’ best interest to see to it that the moral grounding found in the Judeo-Christian tradition is preserved. This is because should secularism do away with that foundation, and then one day find itself in disfavor and itself under the thumb of some radical ideologue hell-bent on purging society of the godless and the infidel, the secularist will have no one to defend them because no one will be left to decry the real injustice of it all.

I will end where he ends, “It is not critical that they themselves believe, only that they should publicly hold in high esteem the institutions of Christianity and Judaism, and to respect those who do believe and to encourage and to give leeway to those who, in truth, will be foremost in the trenches defending us against those who would have us all bow down to a different and unaccommodating faith.”